THE PARTY: I had an amazing and special 13th birthday party.

First, my friends and I met at the mall. There are all kinds of mall hunts, and you may choose whichever version you like, but I chose to do a mall photo scavenger hunt because several of my friends had done traditional mall scavenger hunts earlier in the year, and a photo one would be different. For ideas on mall hunts, you can look on this website or google MALL (PHOTO) SCAVENGER HUNT.

We gave every girl a  $10 mall gift card to buy anything they liked or a snack/drink/candy. The girls were warned not to spoil their appetite. Most people bought items (accessories) anyway though. This was part of their goodie bag. However, this is an optional idea. It was ok for me because a photo scavenger hunt is free anyway.

After the hunt, we met up and judged the contest. Once again, you can look around or even make up your own ideas for how this works. The members of the winning team each got a $5 Starbucks gift card, but big candy bars work just as well. Then, we went to PF Changs for dinner, as it is next to the mall. You can go to a nearby restaurant or even eat at the food court if you like.

After cake and Chinese food (yum! Noodles!), a super stretch, 14 -seater limo came to pick all of us up. Then, it dropped everyone off at their home. We went from who lived farthest away and came back to drop off who lived closer. This way, everyone got at least 30 minutes in the limo.

We opened presents in the limo and their was a fridge full of  drinks, so we were pretty happy. =D THIS WAS AN AWESOME PARTY! INVITES: I bought some nice, pretty fill-in invitations from Papyrus.  Any invitations will do. This was an all-girls party.

FAVORS: In a pretty gift bag from target (on sale!) I put lots of chocolate, a pack of gum, two pretty gel pens, a pencil, a fuzzy, cute keychain from Claire's, a tube of lip gloss (Bath & Body Works OR Claire's), and some Dollar Tree trinkets, such as these cute glass kitties and other random stuff. They were very nice goodie bags, but you can give whatever you wish.

A cute idea is to print the pictures you take and give them to your friends to remember the day/night. 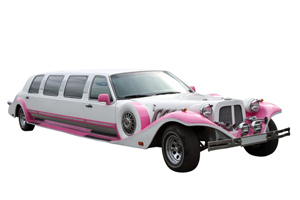